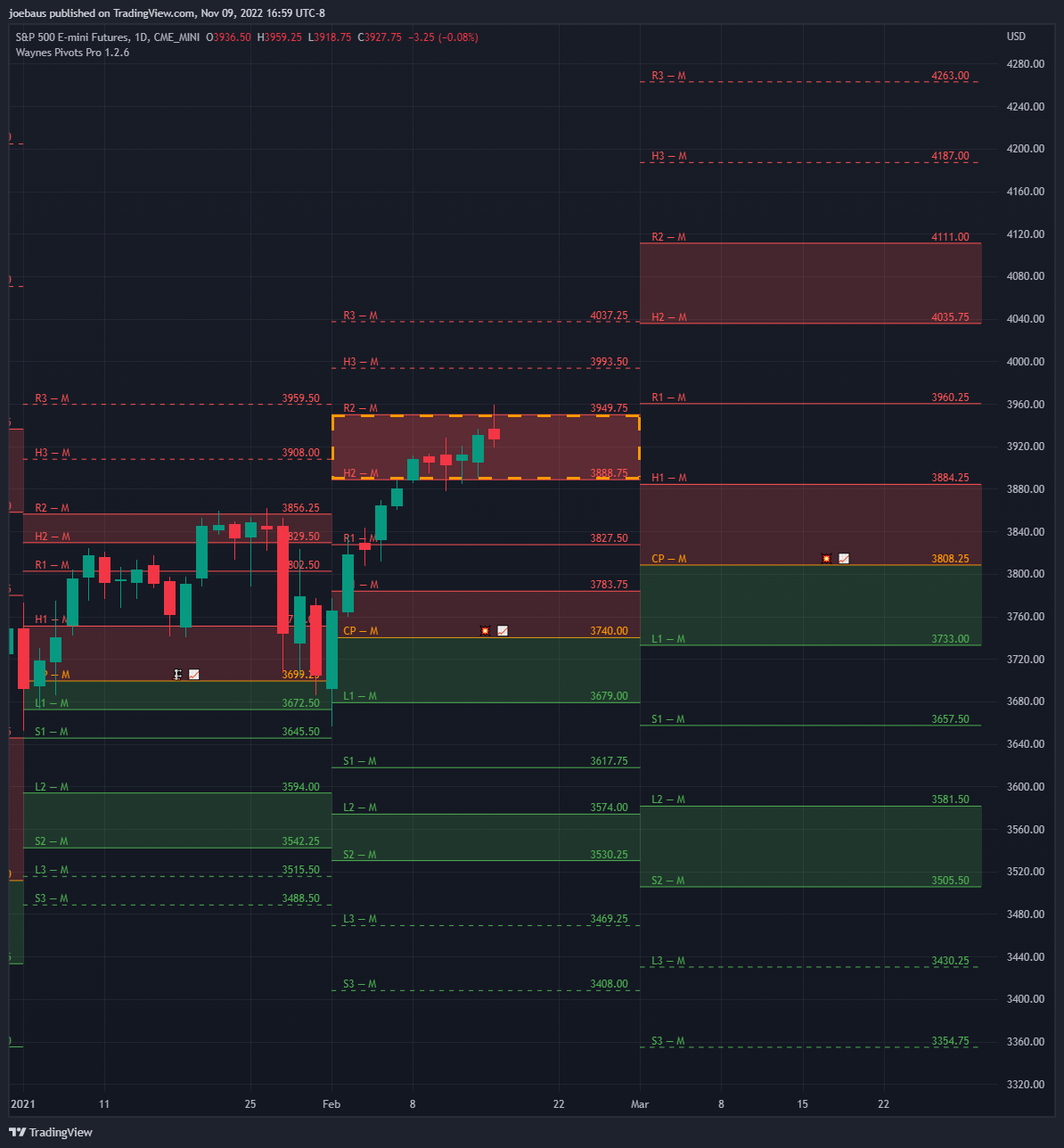 Use code BLACKFRI for 10% off your purchase!

Midpoint pivots is the halfway point between any two sets of pivot points. Simply take the price levels of any two pivots, divide them by 2, and you get a midpoint pivot.

The area between any two pivots could be considered pivot zone.

For example, when combining two zones for the Bullish Range Bias Strategy, it uses the pivot zones S1 - L1 and H1 - R1

To easily identify if price is inside a strategy's entry or exit zone, Wayne's Pivots Pro will highlight the active area by updating the color and drawing a line around the zone.

As price gets closer to the end of the current period, the next period’s pivots move less. Becoming more accurate.

We use this to inform us of where pivot entry and profit zones will generally end up ahead of time. Letting you plan for trades in the future much more easily according to your bias.

Combining different pivot zones, we can create a strategy where we entry in one zone and exit in another. In Wayne’s Pivots Pro there are preconfigured entry and exit zones for bullish and bearish trading strategies.

There are two conditions that must be met in order to select the best strategy.

You are bullish or bearish if you have a directional bias, and you can change the strategic approach based on how much volatility you expect to occur in the market.

Every Pivot Bias includes a Stop Loss level. This allows for simple risk/reward calculations for all the strategies provided.

Wayne's Pivots Pro will display each icon in the descriptions above when a Pivot Condition is met. This helps keep pivot point traders completely aware of how the current pivot point is performing relative to the prior one at a glance.

There are currently six Pivot Bias Strategies, each with a bullish and bearish variant.

The four Pivot Bias Strategies are:

The Standard setup is used when you have a clear directional bias on an asset.

The Range Bias is the most common setup of all the strategies. There are more Range trade opportunities than any other setup.

The Range setup is used when you have a moderate directional bias on an asset, or a period where you expect volatility to stay the same or potentially decrease.

The Continuation setup is used when momentum from the prior period is expected to continue into the next period. Calling for a more aggressive pivot entry.

The most risky setup is the Counter Trend Bias, where you rally to an extended pivot point and then rally back close to the Central Pivot.

This setup is more likely to occur when there is event risk or periods of elevated volatility.

The Extension setup is used when you have a strong directional bias on an asset, and you anticipate high volatility in the same direction as the bias for the period.

Below is a 3x3 matrix for simple decision making on what strategy to use. The x-axis is the Strategy Bias to use. The y-axis is the Market Conditions you are interpreting.

While not much, there is a rule of thumb for identifying counter-trend setups: if you hit the pivot profit zone for a strategy early, as in before the first half of the pivot's period is finished, then a counter-trend opportunity could exist.

Compressed pivots are created when the prior trading period experiences low volatility, and the current R3 pivot is lower and S3 pivot is higher than the R3 and S3 pivot points from the prior period.

This exposes price in the trading period to reach prices past H2 and L2 more easily. Especially if there are any known volatile economic events planned for that period. Reaching or going past R3 and S3 is also far more likely when we get compressed pivots alongside volatile events.

Expanded Pivots are created when the prior trading period experiences high volatility, the current R3 is higher and S3 is lower than the R3 and S3 pivot points from the prior period.

When volatility continues to expand and momentum is strong going into an expanded pivot can lead to a higher likelihood of bigger P/L swings. Though, those conditions seem to be the exception.

Most expanded pivots do not see continued rising volatility and strong momentum. This makes reaching pivot zones to trade a strategy less likely. Reaching pivots past R1 and S1 can especially become less likely to reach.

Targets must be reduced, and possibly smaller timeframe pivots, in order to trade Biased Pivot Strategies.

Stacked Pivots refers to applying 2 or more copies of Wayne's Pivots Pro to your charts that use different timeframes, and then applying strategies to each one.

Stacked Pivots have a "Hierarchy" where the highest timeframe pivot, and its strategy, should take priority in trade decisions over the shorter timeframe pivots.

However, during the middle of a month, the weekly pivots can be especially useful for managing the trade's risk due to the responsiveness it has relative to the static monthly pivot: using weekly pivots for adding positions, limit orders, and managing stop loss orders to manage the trade of a higher Hierarchy monthly pivot. The same dynamics apply for daily and weekly pivots, and so on.

The regular Support and Resistance labels are not used to also label midpoint pivots. They have many label options based on preference.

There are midpoint label styles that use an M# prefix in a few ways. One sets all midpoint pivot to the label M, and then from the bottom to the top of the pivot range they're labeled in order starting from zero (0) up to the number of midpoint pivots drawn.